Courtesy of TheSpec.com
by Kathy Renwald

Revival of a classic 1845 Hamilton home 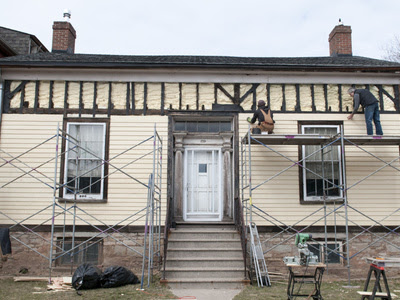 One of the oldest houses in Hamilton is getting a new shake at life. It’s on Mary Street and it’s been there since 1845, before Hamilton became a city. The wooden house looks pioneer plain, until you look closely at the front entrance. The unadorned front door is framed by two columns of exquisite beauty, topped by capitals with hand turned scrolls and acanthus leaves. Classic Ionic architecture buried in Hamilton’s North End. The columns hide shyly, set back from the strips of clapboard that were run through the planes of Thomas and Peter Fitzpatrick. They built the house 168 years ago. We know because their tools, engraved with their names, are still in the house, in the attic, in a dusty chest. 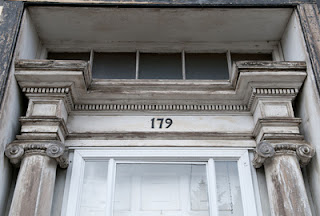 Yes, that’s the kind of story this is, one of fortunate coincidence and miracles.
“My family is helping me to fix the house,” Dolores Hastings says in her simple living room.
She grew up there. Her grandfather bought the house in 1942, from the last descendent of the Raich family. The Raiches were wagon makers in Hamilton, they bought the one-and-a-half storey Mary Street house, likely from the Fitzpatricks, around 1865.

“I’m sorry it’s so noisy, “Hastings says amid the thud of hammers. It’s a happy noise, though. Doug Vickers, owner of Vickers Restoration in Ancaster, is set up outside. With strips of clear white pine, his modern tools and his assistant Johnny Overbeeke, he is fixing what needs fixing on Mary Street.
“It’s a miracle this house survived,” Vickers says as he cuts new lengths of clapboard to replace ones too rotted to save “especially with a cook basement.” The basement had a fireplace used for cooking, where it’s possible the cooking was done by servants. “This was an upper-middle-class house,” Vickers says. He’s worked on many fine homes in Ontario and across the United States, including the restoration of the Farmers’ Museum in Cooperstown, N.Y., but it’s always gratifying to save a house in your own city, he says. Dolores and her husband Ken Hastings bought the house from her mother in 1966. Her husband insisted. He grew up in an 1860s wooden beauty on Ferrie Street West, overlooking Hamilton Harbour. Together on Mary Street they raised three kids, and Ken worked on restoring the house when he had the time and the money. Walls were replastered and wood plank floors restored. He insisted the house be designated under the Ontario Heritage Act, where it is described as a “rare surviving example of pre-Confederation frame construction in Hamilton and the Classic Revival style.” In the book Victorian Architecture in Hamilton, The Raich House as it is called after its long association with the Raich family, was celebrated for its refined, gracious and restrained style.
Though they did what they could, over the years the exterior of the house started to deteriorate. Paint flaked off the clapboard, eaves sagged, and a chimney fire damaged the north side of the house. “I was ashamed of it,” Dolores says. Husband Ken died in 2005, and the kids finally decided to help their mother finish the restoration. “They want me to be proud of it,” she says.
It took a long time to find the right carpenter to start the work. Some people thought Dolores should just cover the place in aluminum siding. “No, no, no,” she says. Vickers was the right man, with experience and a love for old houses. He is fastidious to the point he is reshaping square nails he bought for the clapboard, to replicate the 1845 originals. He’s also agreed to work on the house in phases, as the budget permits. The wood siding on the south side needs attention, and the original six-over-six windows, with their delicate glass, will be repaired. “The sills are still level,” Vickers says with admiration. 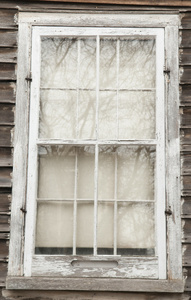 As work continues on the exterior, passersby stop to admire the restoration and give encouragement. Architecture students have visited many times over the years to ask the Hastings about the history of the house.

In April the clapboard on the front of the house will be finished, a new coat of paint applied, and the gorgeous front entrance will glow. 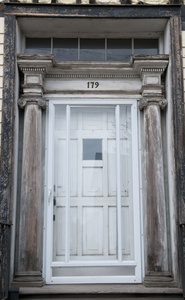 Dolores Hastings is reviving a classic piece of Hamilton history. Some people would not be up to the task of caring for the old wood, the fragile windows, and the stone foundation. She is, mainly for her late husband. 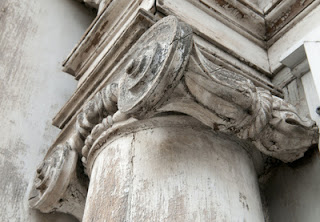