AUCHMAR ESTATE HAMILTON, ONTARIO
Former home of the Honourable Isaac Buchanan and a significant monument to the economic, cultural, and architectural history of Canada.

Auchmar is recognized by the Ontario Heritage Trust as having significant historical value and is currently owned by the citizens of Hamilton.

Preservation and public vs. developer ownership are currently in debate. Citizens of Hamilton and anyone who has visited the grounds or stepped inside the building comes away saying, we must save this heritage.  Is Hamilton a city with a teardown mentality or one with a vision for restoration? Now is the opportune time for the citizens of Hamilton and specifically residents of the Mountain to stand up and speak loudly for preservation of the Auchmar estate.
Read the Spectator article HERE 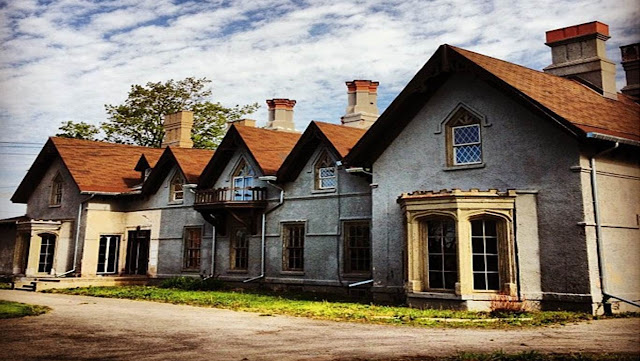 Auchmar was built in 1854 on land that Buchanan had purchased two years previously. Its name was taken from the Auchmar estate on Loch Lomond, Scotland, which Buchanan's family had owned. 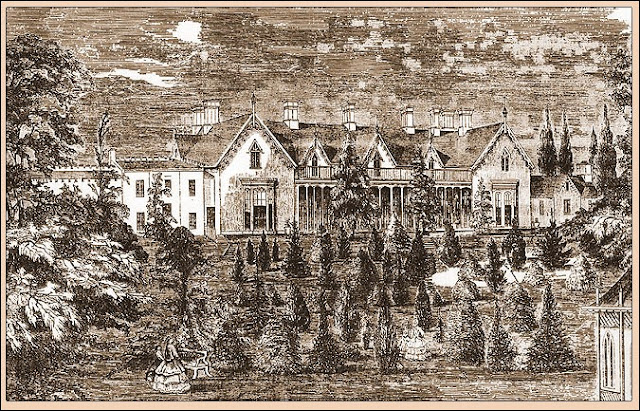 Over the years the magnificent house was visited by such notables as Sir John A. Macdonald, Sir Allan MacNab, Pope John Paul II (when he was Cardinal) and the Prince of Wales during an 1860 Royal visit. Auchmar still stands on 10 acres of an eighty-six acre spread that Buchanan called Claremont Park. It was considered an elegant example of gothic revival architecture with its arched windows, eleven chimneys, gables, and French doors.

In July 1936, Isaac Buchanan's daughter Elsie shared her memories of Auchmar's early years with a reporter for the Spectator. She said that the family's original intention was to live on the Mountain only during the summer months, as they maintained a winter residence on Henry (now Cannon) Street. Buchanan, however, was so enamoured of the Mountain location and views that he resolved to make Auchmar his full-time abode. The Spectator article noted, "Isaac Buchanan said that the first time he climbed the Mountain and saw the view, he felt like running down and asking people why they didn't build up there. His enthusiasm grew with the years and he was ever an advocate of the idea that the town should be built on top and not under the hill."

Elsie Buchanan said that there were originally glass-enclosed verandahs running the length of the house's front and back, as Isaac was determined to experience the health benefits of the sunshine even when it was too cold to step outside. Years later this 'indoor exposure' practice was used to combat tuberculosis, prompting Miss Buchanan to point out with pride that her father was a thinker ahead of his time.

Auchmar's interior was finished in beautifully grained soft wood, and almost all the inside walls were brick, making the house nearly fireproof. 10 fireplaces were on the ground floor. A long hall in the shape of a Roman cross occupied the main floor, and stairways with bright, large windows ascended from each end, allowing free circulation of air. At the west end, halfway up the stairs, was a niche in the wall containing a French bronze statue called 'Night'. Plans to have a corresponding statue in the east window called 'Morning' never came to fruition. 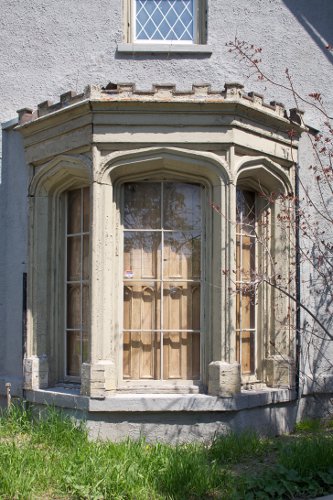 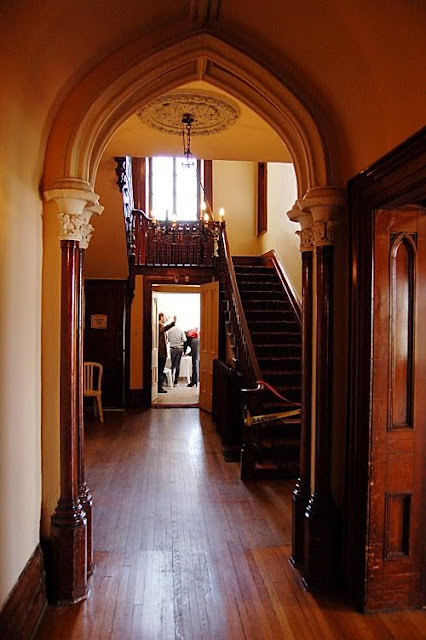 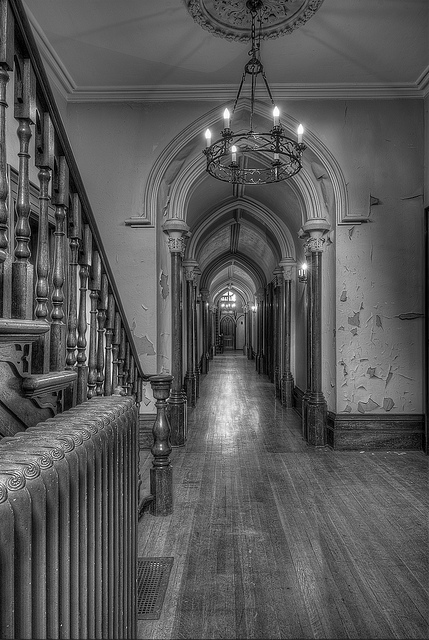 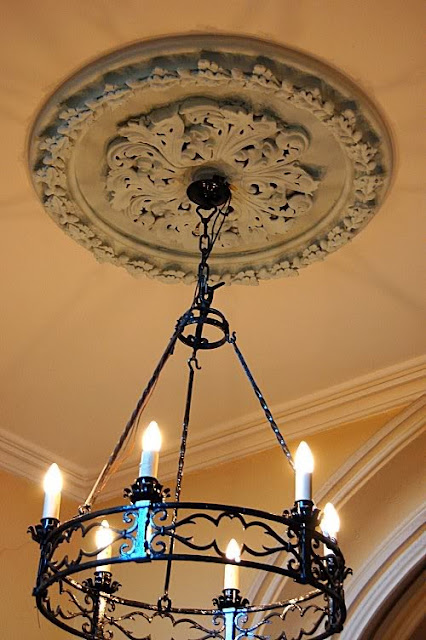 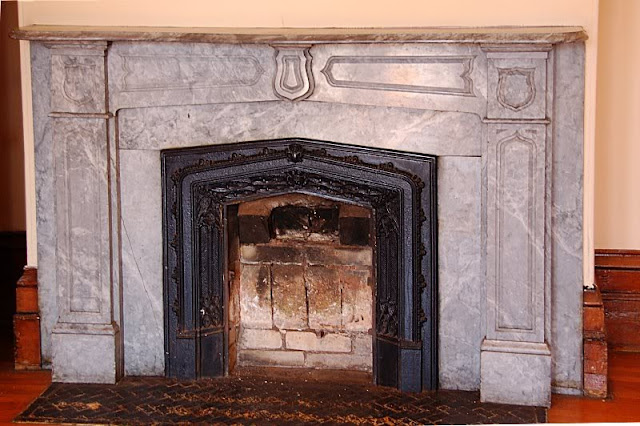 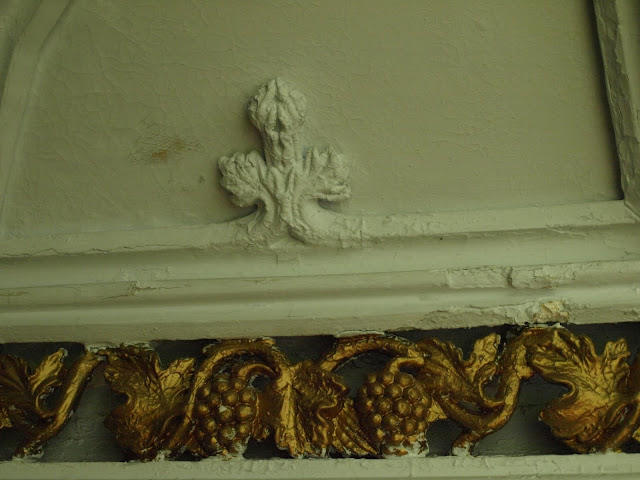 Miss Buchanan said that from its earliest days, Auchmar had a bathroom and a furnace, both features not found in too many residences during the 1850s. "Another proof that my father was ahead of his time," she said in 1936.

The builders originally planned to make the ground floor consist of four large rooms with identical dimensions of 18 x 20 feet. Then it was decided, probably at the suggestion of Mrs. Buchanan, that the dining room be more generous in size, in order to accommodate the lavish parties that the Buchanans intended to hold for government officials and political associates. There was also a music room with cane lined walls (similar to the bottom of a chair), in which Mrs. Buchanan, an accomplished singer, gave recitals. The unique wall covering improved the tone and resonance of all sounds.

Mrs. Dick-Lauder, author of Wentworth Landmarks (1897), visited Auchmar in the 1890s and vividly recorded her impressions. "From a distance it gives the impression of a little walled fort," she wrote. "...the eastern entrance to the house is next to the conservatory, and the visitor is at once ushered into a most cathedral-like main hallway running the full length of the house.... The hall is cathedral-like because its ceiling is Gothic. Nor is it gloomy, as one might imagine. The effect is not gloom; it is something different- a dim, religious light."

Most dignitaries and political figures visited Auchmar whenever they passed through Hamilton. Elsie Buchanan recalled how the house was once filled to overflowing with the entourage accompanying Sir John Young (later Lord Lisgar). Lord and Lady Dufferin, Sir John A. Macdonald, and the Prince of Wales (later King Edward VII) also enjoyed the Buchanans' hospitality. 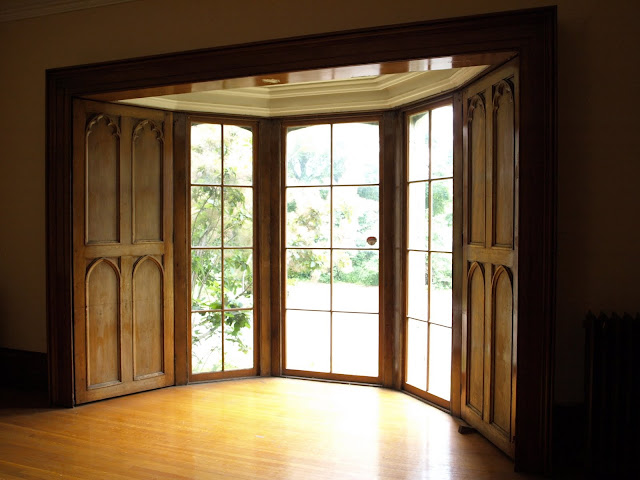 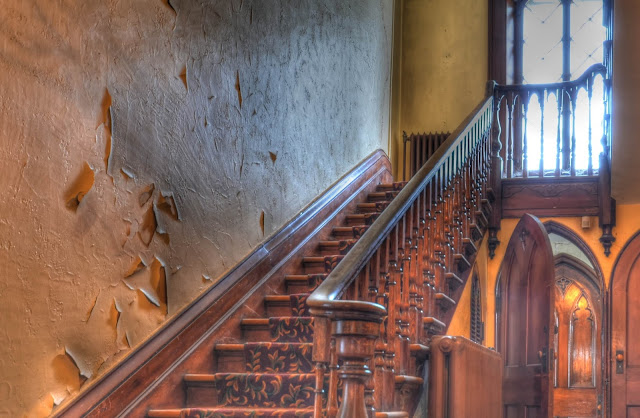 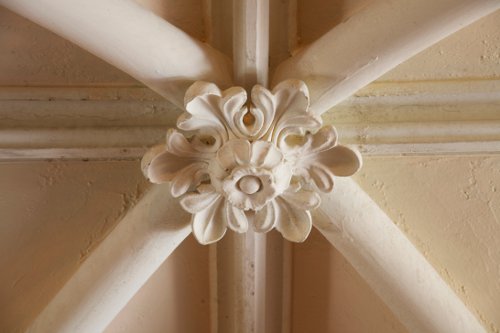 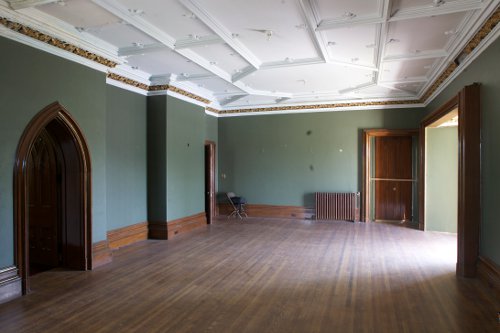 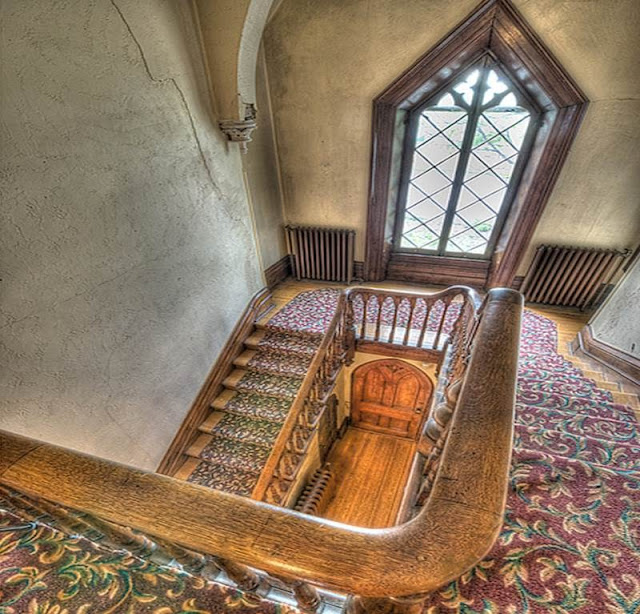 When Isaac Buchanan died in 1883 at the age of 73, Auchmar was sold to Captain Trigg, a military man from India. In 1900 James Buchanan, Isaac's fourth son, bought the property back. Some of his sisters, Elsie among them, lived there for years afterward. In 1926 the family sold Auchmar to A.V. Young, who lived there with his family until September 1943, when it was rented to the Royal Canadian Air Force as a rehabilitation centre. The Hungarian Sisters of Social Service bought the mansion and land in 1945 and retained ownership until 1999, when Auchmar was acquired by the City of Hamilton.

Check it out for yourself. Doors Open Hamilton typically hosts tours every year in May.

Factoid
This gate lodge was built for the Hon. Isaac Buchannan (1810-1883) who was born in Glasgow. He emigrated to Toronto in 1830, became a successful wholesale merchant, represented Toronto in the first Legislative Assembly of the Province of Canada, 1841-44, and moved to Hamilton about 1850. He bought property here, named it the Claremont Estate in 1852, and in 1855 built the lodge and the main house, now located at 88 Fennell West. Buchanan subdivided the estate and renamed the main house "Auchmar" after the Buchanan estate on Loch Lomond, Scotland. He became Member for Hamilton, 1857-67, and served as President of the Executive Council in the 1864 Tache-Macdonald administration. He died in Hamilton in 1883. 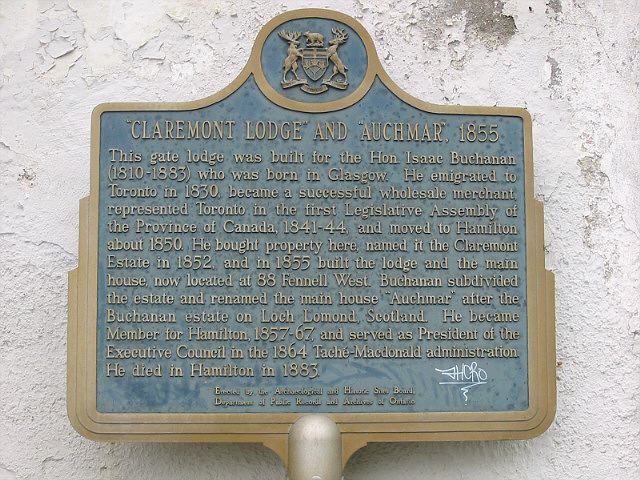