360 Queen Street South, Hamilton, ON circa 1920s
This FRESH Kirkendall listing with its copper eaves, slate roof and columned portico has surely turned your head one or two times in the past. Standing proudly on the south west corner of Queen St S and Aberdeen Avenue, this stately centre hall serves as a gateway to a prestiguous set of century homes dotting both sides of the Queen Street Hill.

FRESH FACT:
The Queen Street Hill Opened in 1894, just before the coming of the automobile (source: cbc.ca) 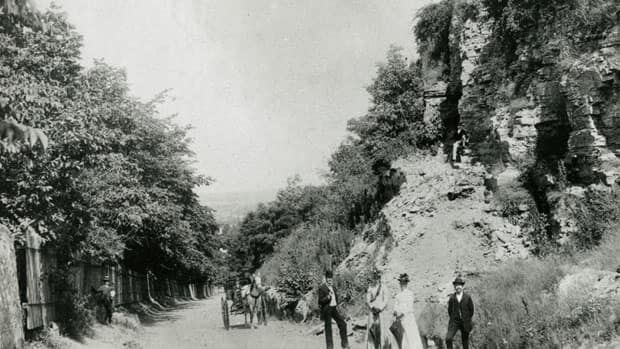 Queen Street South was a quiet tree-lined residential avenue before it became a major arterial road leading to Beckett's Drive up to Garth Street on the Mountain Top. (source: wikipedia)

The access, also known as "The Queen Street Hill", was once referred to as "Pill Hill" with its grand early 20th century residences (some 19th century) home to Hamilton's elite (many doctors) - hence the 'Pill' of 'Pill Hill'.

Posted by FreshBrick at 8:21 PM